ProInspire is no stranger to Jim Collins. Good to Great and the Social Sectors: a Monograph to Accompany Good to Great is an introductory read for all Fellows within the first few months in the sector. However after reading the monograph and receiving so many recommendations to read his best seller that inspired it, I finally decided to pick it up.

Conclusion: Good to Great is a must-read for anyone committed to one day leading an organization that truly represents excellence, no matter its tax status.

The book is based on the premise that “good is the enemy of great.” Collins expounds:

Being curious by nature, Collins was determined to find out the difference between organizatins that are good versus those that are great. He and his research team set out on a “odyssey of curiosity” which started with an analysis of American corporations to decide on a set of eleven that could be considered good-to-great examples and ended with a framework (shown in the image below) that captures the process each company went through to be considered great. 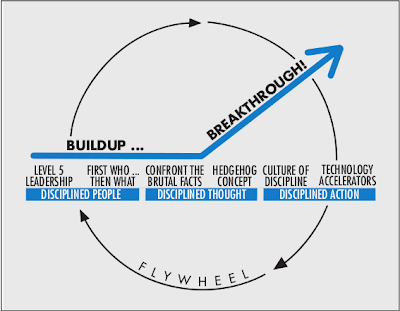 Level 5 Leadership – Collins’ research team found that the first ingredient for greatness was a leader with a “paradoxical blend of personal humility and professional will.” Unlike many would expect, individuals at the helm of companies considered to be great were not high-profile leaders with some previous claim to fame. The were quite the opposite.

Confront the Brutal facts – This boils down to facing reality in order to truly make good decisions about the direction of the organization. However, in doing so, Collins’ team found that great organizations also maintained unwavering faith that they would prevail no matter how harsh the reality proved to be.

The Hedgehog Concept – A core component of the framework, the hedgehog concept requires organizations to base their strategy on three dimensions: 1. What you can be best in the world at, 2. What drives your economic engine, and 3. What you are deeply passionate about.

A Culture of Discipline – Collins believes that bureaucracy and hierarchy are only necessary when the wrong people are on the bus. In a culture of discipline the right systems are in place yet there is sufficient freedom for people to deliver results.

Technology Accelerators – Good-to-great companies never use technology as an excuse for their problems nor do they depend on it to propel them forward. Rather, they are thoughtful in their approach and choice in technologies, using it as an accelerator of momentum.

The Flywheel and Doom Loop concept then goes on to explain that companies never make a leap from good-to-great with a magnificent moment or grand program. It comes down to consistently building momentum until there is a breakthrough.

I unexpectedly found Good to Great to be an engaging read, despite being a business book, because of its storytelling style. Collins literally walks the reader through each component of the framework in a way that leaves you feeling like you were present during many of his research team’s meetings. Section by section we become aware of many of the conversations, disagreements, and light bulb moments that occurred over those five years.

With this storytelling style also came a level of transparency that you wouldn’t expect from this type of book. Not only do we hear the way in which many of the conclusions are made, we also learn of findings that Collins’ research team unexpectedly discovered along the way, each of which were added to the end of relevant chapters.

Ultimately, Good to Great is a must-read as it provides unprecedented insight into the dimensions of leading an organization that consistently delivers, demonstrates excellence and can one day be considered great.