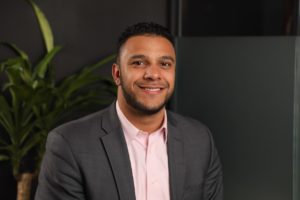 Isaias Garcia participated in the Fall of 2015 M4S cohort in Washington, DC. Isaias currently works at the The Financial Clinic in New York City as an Ecosystem Account Manager helping Latinos across the country become financially secured.

Prior to The Financial Clinic, Isaias spent three years with Year Up, working in several roles, including Business Communications Instructor in the Academics program; Program Manager, preparing students for corporate internships; and Internship Services Manager, helping interns climb the ladder of success to secure livable-waged jobs after completing their internship. In addition, he was featured in the New York Times on working with nonprofits during Thanksgiving.

Isaias holds a Bachelor’s Degree in Writing and Rhetoric from Hobart College in Geneva, NY. His passion for financial coaching dates back to his first year there, upon completion of the Money Matters financial literacy curriculum. A fun fact about Isaias: he has both flown and jumped out of a plane (not to worry, they were two different occasions).