Relief, Grief, and the Power of Community 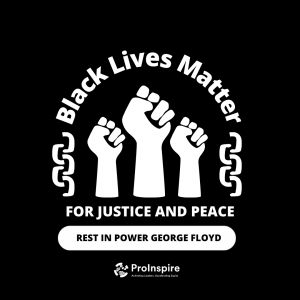 What does Derek Chauvin’s verdict remind us about awareness, action and accountability?

To be clear, justice for George Floyd would have been for him to be alive.

This week, we joined countless people around the world in a collective sigh of relief as the verdict was read. It pains us that we are here yet again, reflecting on the murder of George Floyd while so many Black and Latino people continue to be killed through police violence.  And, we continue to mourn the loss of Black and Brown lives at the hands of police officers, we honor the lives of Duante Wright, Adam Toledo and Ma’Khia Bryant. The fact that Black bodies are treated as inherently more violent, dangerous and aggressive is a systemic problem that goes beyond the conviction of one police officer. One outcome does not change a culture, and to truly end racism and its manifestations we must address the ideology of white supremacy that values white comfort more than Black and Brown lives.

With that being said, as a learning organization we believe that there is always something for us to glean from momentous events, such as this. What does this verdict, demands for police reform, and accountability have to teach us about race and power in the social sector?

Collective outrage – Thank the activists and agitators and those who mobilized in the streets. Their anger and outrage made the world listen. In our organizations, we should consider why those who are most impacted are expected to politely speak up over and over again, as well as  the righteous resentment this labor creates.

Collective action – Many people stood in solidarity with Black folx and collectively demanded change. Bystanders and witnesses spoke up, they risked their safety on behalf of someone else and were willing to relive trauma.

Calls for accountability – Came from peers, experts and young people. Darnella Fraizer was only 17-years-old when she recorded the murder of George Floyd. How do you hold yourself accountable to the statements and commitments you made when George Floyd was murdered? Changing systems starts with changing our own.

Moments before the jury in Minneapolis convicted former police officer Derek Chauvin of two counts of murder and one count of manslaughter for George Floyd’s death,16- year-old Ma’Khia Bryant was killed by Columbus, Ohio police. This is a reminder that there is more work to be done. Changing systems starts with changing our own. Within the social sector we have an obligation to examine how racism shows up within our organizations, impacts our interactions and shapes the experiences of Black and Brown staff each day. How are Black men in the social sector treated? Are Black bodies seen as inherently more aggressive, dangerous and violent? In what ways are Black and Brown employees forced to assimilate and code switch to cater to white comfort and fragility? White comfort can no longer come at the expense of Black and Brown lives and the well-being of BIPOC communities. If this verdict can remind us of anything, let it remind us that Black people are inherently worthy of life, liberty, and well-being, as we all should be.

Hear from Co-Ceo Monisha Kapila, as she shares key lessons on “Holding Space When People Are Grieving.” Read about it here!